The Nanobugs do not acknowledge “the 5-second rule”

24 Feb The Nanobugs do not acknowledge “the 5-second rule”

Posted at 23:36h in Blog by nanobugsadmin 0 Comments
Share 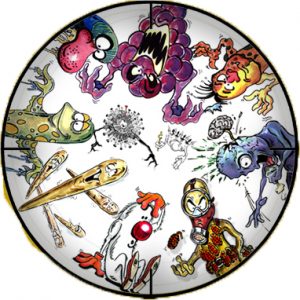 I am sure you have heard of the 5 second rule – or maybe you call it the 10-second rule or the “less time than it takes the dog to discover the item on the floor rule”. Wikipedia describes the five-second rule as a popular urban legend regarding the eating of food that has been dropped on the ground – it may be eaten as long as it is picked up within 5 seconds.

The problem I have with this “rule” is that it focuses only on time.   Contamination is not usually measured by time but rather, by other variables and/or a combination of variables, like – How dirty was the floor? or the bioload on that surface? Is the floor contaminated with foodborne pathogens or just soil and cat hair? Was the floor wet or dry? Was the food item wet, dry or sticky?

In epidemiology, the contribution of “exposure time” is considered but it is not a a major contributor to contamination outside of the hospital operating room.   And the nanobugs certainly do not acknowledge the 5-second rule or the 10- second rule. If there is a reservoir of nanobugs on the floor, and you drop a piece of sticky bologna there, the bologna is surely contaminated and would not be considered “safe to eat”.   There are several additional determinants that can contribute to infection transmission- whether you get sick from ingesting the contaminated food item. You can read about several “studies” done by college students testing this 5-second rule or see on the Discovery channel (MythBusters). But the best thing is to stick to the basic rules for prevention of foodborne illness: keep the kitchen floor clean, keep food off the floor or other contaminated surfaces, and wash fruits and vegetables brought in from the garden. Put the stopwatch away and remember the nanobugs can be lurking all over the floor and the ground. – they’re not picky!

Sorry, the comment form is closed at this time.

Rap Video from Hep A