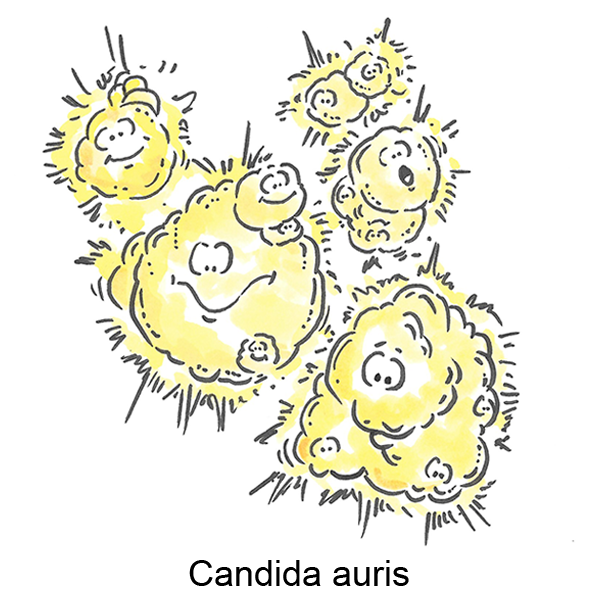 Nickname: Resistant Candida (“auris” is a Latin word for ear.)

Morphology: Oval shaped, single-cell fungi (yeasts) that reproduce by “budding”. Budding starts with changes in the cell wall of the parent cell to form a daughter cell that eventually breaks free and becomes a new parent cell.

Habitat: Candida can live on the skin, the ear, in the mouth and intestines.

Disease or illness: Like other yeasts, C. auris can cause infection at any body site. This yeast has caused serious bloodstream infections, wound infections, urinary and ear infections. It’s resistant to many commonly-used anti-fungal drugs making it difficult to treat these infections.

Who is at risk: C. auris preys on the sickest of hospital patients, especially those who have been in ICU for a long time, have a central venous catheter in a large vein, have had recent surgery and have previously received antibiotics or anti-fungal drugs.

Avoidance techniques: Diabetics should mange their disease properly to avoid yeast and other infections. In the hospital, rapid and accurate identification of the specific Candida causing the patient’s infection so effective treatment can be started.

“No longer a simple yeast in your ear, I’ve developed resistance and created some fear”